Americans Are So Wrong About the Constitution

The first day of my freshman year of college taught me a life lesson I have never forgotten. Two years out of high school, I worked to save up money and obtain enough scholarships to begin the 4-year journey to snag that supposedly necessary Bachelor’s degree. Starting college at age 20 meant I wasn’t on campus to drink, party, and fool around…I was there to learn.

What I didn’t anticipate was the level of fear I still held about mundane things I learned in my K-12 schooling. The most ingrained of these was to “Never, ever, ever write in your textbook!” This was a cardinal rule. If we turned in our textbooks at the end of the year, they were inspected for markings. Any markings would result in a fine, and my mom would have given me that stern “Do you fucking think I’m made of money?!?” look.

Thankfully, those rules don’t apply once you graduate high school. Yet, it is difficult for kids to make this transition – we can be told “It’s okay to write in your textbook, you won’t be fined” but actually getting kids to believe it is more difficult than one would think.

Remember Red in “Shawshank Redemption”? The man spent so much time in prison that he still asked permission to take a piss when he became a free man. Seems silly from an outsider’s point of view, but habits are hard to break.

Thus, my Econ 110 professor (I will call him “Dr. G”) had an exercise on Day 1. After he made introductions, told us the rules of the road, and promised we would never forget him (which ended up being true), he said “Everyone take out a pen.” We sheepishly took out writing instruments, but he realized specifics were required.

“Take out a pen. Not a pencil, not a highlighter, but a pen. What you do will be permanent.”

Once the class had pens in hand, Dr. G said firmly, “Turn to page 243. Take that pen, and strike it across the page.”

At first I thought the editors had made a mistake in the book, and he was asking us to strike through it so we would ignore whatever was written. Oh no, he was much smarter than that. Dr. G was teaching in no uncertain terms that our fear of marking up textbooks was stupid, and the only way we can TRULY understand was to do what we had always been told not to do.

“Now, don’t you feel liberated?” Dr. G asked with a smirk. “This is my expectation – you are in college and you need to know some rules no longer apply. You’ll be taking a lot of notes, and we will be going fast, so you may want to write those notes in your books. Ok, let’s get started!”

What an important moment for me. I was two years removed from high school, and I still had to be told that it was ok to damage my own property! Dr. G had years of experience in teaching important lessons, so he understood his leverage – students have a trust for the professor’s authority on Day 1, and those students will follow his instruction to do the unthinkable, until the unthinkable becomes allowable. Essentially, “He is the authority on this subject, and he says it’s ok, so that is important.”

(For the record, I am speaking merely in terms of classroom subject matter. As the incredibly important #metoo movement has shown us, I do not believe that “He is the authority and he says it’s ok” is transferrable to matters upon which such authority is used to intimidate, violate, or abuse another human.)

Years later, I realized the lesson Dr. G taught me was applicable to something very important in the American political culture – Originalist vs. Living Document. Many modern political arguments boil down to these two theories regarding how our Constitution is designed to account for an evolving country.

Originalists have several differing factions (original meaning, original intent, semantic originalism, framework originalism) but the common thread relates to the Constitution as a static document, meant to withstand the ebb and flow of changing culture. Originalists do not appreciate liberal (small “l”) interpretations in the courts which can subsequently create or repeal laws currently in place. Rather, originalists prefer any change to laws be passed in the legislative body of government via a formal Amendment to the Constitution.

By contrast, Living Documentarists believe the document to be fluid, and open to broad interpretation as American culture changes. Knowing how difficult Amendments can be to pass (especially in the current Legislative body which has become more concerned in recent decades with donor-appeasement than voter-appreciation) those who see the Constitution as a living document appreciate how our country has progressed since the 18th Century. They believe the Framers of the Constitution would not expect their original verbiage to strictly dictate 21st Century policy in every instance.

One case of the dueling viewpoints is with the 2nd Amendment. Originalists fiercely defend the words “…the right of the people to keep and bear Arms, shall not be infringed.” Though this seems very clear, the Living Document crowd feels very passionately that advances in firearms since 1789 have rendered the original meaning ineffective, given modern firearms are now creating mass casualties encroaching on the public’s right to life and liberty. Debates about the 2nd Amendment quickly lead to a stalemate due to increasing polarization in the media, and special interests flooding the Legislative branch of government with cash.

I believe the answer to whether the Constitution is a living or static document lies within the story of how it was written. One of the many arguments during ratification was the Constitution’s lack of a specific section to place limits on government power, such that certain rights for individuals could be explicitly noted. James Madison offered to make edits to the Constitution to incorporate a bill of rights, but some representatives were appalled at the notion of changing the wording in the Constitution itself. 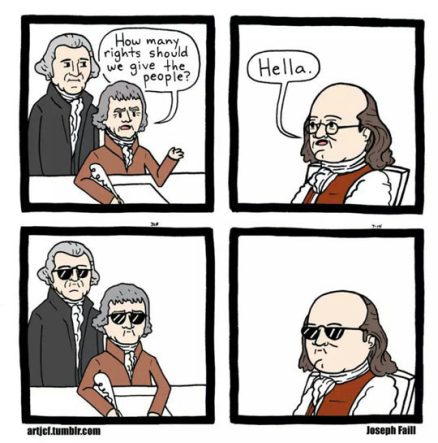 Thus, the Originalist vs. Living Document argument existed even as the Constitution was being ratified. While Madison was prepared to revise the existing document to accommodate requests for individual rights, men like Roger Sherman (a representative from Connecticut) felt strongly that the Constitution they already drafted was not to be altered.

Where the Continental Congress ultimately landed was telling. Men like James Madison and Thomas Jefferson strongly believed that the Constitution was to be a document interpreted alongside the progress of America. Therefore, they were purposeful in granting the Bill of Rights as ten amendments to the original Articles, rather than within the original Articles themselves.

As in Dr. G’s exercise, the Founders were the authority in this subject, and they wanted the world to follow their instruction to do the unthinkable, until the unthinkable became allowable. What better way to ensure subsequent generations of Americans understand the Constitution is a living, breathing, document than to immediately amend it ten times?

That element has been largely lost in our current discussions. Some in our society focus more on glorifying the Constitution as an infallible document, written by divine inspiration, that may as well have been etched in stone (like the Ten Commandments), rather than how the gesture by Madison and Jefferson directly contradicts that theory.

Part of that understanding is to know what we are up against in today’s America. Originalists can easily argue that the way to change the 2nd Amendment is to do another amendment. Whether you subscribe to Originalist or Living Document, the current level of corruption in our government works against you. Though the Founding Fathers were aware that corruption would always exist, I doubt they anticipated what is happening now: Money from wealthy donors buys votes, power, and suppresses the will of the people.

The Framers felt checks and balances from other branches of government would prevent such holistic corruption, but I bet they never imagined ALL levels of government becoming complicit in that same corruption. Yet, that is where we are.

Examine the evidence: Pro-lifers have not been able to amend the Constitution to stop abortion, have they? Gun control advocates haven’t been able to amend the Constitution to ban certain types of weapons, have they? With decades of divisive arguments under our belt as a country, these two issues are textbook cases for Amendments, but nothing has been done. Congress is completely awash with blood money from special interest groups who depend upon our country remaining divided.

No incentive to stop the money train = no action.

We have not amended the Constitution since 1992, when the 27th Amendment was fully ratified (which, FYI, was more than 200 years after Congress initially proposed that Amendment!). 1992, y’all.

In 1992, the Atari 2600 was discontinued. In 1992, President George H.W. Bush vomited on the Japanese Prime Minister. In 1992, George Michael reiterated to the public that AIDS was not merely a “gay” disease. In 1992, the Pope apologized for the Catholic Church’s 17th Century condemnation of Galileo.

If the above headlines make you say “WTF?!?” then it’s been too long.

America, it is time to see the Constitution for what it is: the initial government roadmap for an 18th Century society. Interpretations of the verbiage should be welcome, and changes to it (in any legal way we can change it) should be encouraged.

As we navigate yet another school shooting aftermath, let us not be afraid to take up our pens and make a mark in that Constitutional textbook.

2 thoughts on “Americans Are So Wrong About the Constitution”