The Hidden Art of Silent Films

Silent films are a lost art.  Hollywood really has gone overboard on special effects and underwhelming plot lines (that is, when they do something other than just remaking an 80’s film or re-vamping Superman for the zillionth time).

I took a trip back to my alma mater Ohio Wesleyan University last weekend.  As I meandered down memory lane, I was saddened to see my favorite professor, Helmut Kremling, was no longer teaching.  Not only was he a great mentor for me while proffing the courses of my major (German Studies), he also taught an Introduction to Film class that completely opened up a whole new world to me.  I had always been a lover of movies, but never before had I experienced so much fascination with a dying art form.  Much like the old celluloid films of the late 19th Century, the structural integrity of true trend-setting and cutting-edge films is in question.

Considering how many of us gripe about cell phones and computers causing social ineptitude (one can’t walk down the street without seeing earbuds as a social barrier – of which I am 100% guilty) it is miraculous to watch silent films, when facial expression and posturing was the only way an actor could connect with a viewer to channel the emotion in a particular scene.

Do you have any idea how difficult it is to show 100% of your emotion in your face, and not through your words?  Often times when I find myself angry or hurt, and have to express that to another person, I really don’t feel like I can express myself fully unless I talk it out.  I can’t quite emphasize the level of screwed I’d be if I could never portray my emotions in words. I suppose that’s why I’m a better writer than actor.

The first silent film I watched in its entirety was “Broken Blossoms” starring Lillian Gish and Richard Barthelmess.  Gish stars as a battered child of “Battling Burrows”, an alcoholic boxer.  After being beaten severely by her dad, she is taken in by a very kind opium-smoking Chinese fella.  By modern standards, this film is incredibly insensitive in portraying old stereotypes of the Chinese culture.  However, it does show a kindhearted man who wants to fix a broken girl – the broken blossom – by nursing her back to health and hoping she will reciprocate his love for her.  Of course, the jerk of a father doesn’t like hearing his daughter is hanging with a “yellow man” as they called him (grrr), and he sought to beat the crap out of Barthelmess’s character as well. 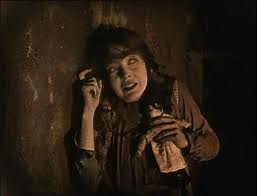 Gish and Barthelmess were the Tom Hanks/Meg Ryan pairing of the early 20th century, going on to star in several popular films together before talkies dug significant divots into their careers.  It is no wonder to me why director D.W. Griffith was so enamored of Lillian Gish (he truly was in love with the girl!), seeing the depth of character in her tiny body and the abyss of emotion in her captivating eyes.  That film changed my life, and my ability to see film as an art form rather than just entertainment.

Perhaps it was the “damsel in distress” nature of the Gish/Barthelmess pairing, or it could have been the fact that both actors were unquestionably refined in their charming good looks. 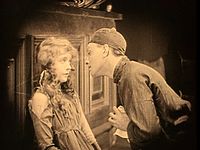 Regardless, I felt like I lost myself in the film’s plot, and felt every single emotion Gish showed on her face.  What struck me most was that I couldn’t think of a single modern film that carried that much emotion.  Mel Gibson’s “FREEEEEEEEDOMMMMMM!!!!” or (more lightheardedly) Tom Cruise’s “SHOW ME THE MONEY!!!!” come close, but still have nowhere near the unbelievable pain or desperation the characters Gish portrayed as having in “Broken Blossoms” and (another Gish/Barthelmess match-up) “Way Down East.”

So what’s a girl to do when she wants to get a good cry going on up in here?  That’s right, I watch Lillian Gish.  I could choose to watch “Fried Green Tomatoes” for the umpteenth time, with a side dish of “When Harry Met Sally”, but I sometimes find myself losing the sappiness every time they tell a good joke.  The dialogue seems to get in the way.  You know that feeling when you’re so mad you could scream/cry/something-in-between/maybe-both, and then someone tells a joke that makes you laugh and you think “DAMN! I almost got a good cry in!”  With silent dramas, the cheesy dialogue only hinders the emotion, insomuch as one is willing to read the words on the screen.  If it’s too cheesy, my eyes are closed for that 7-8 seconds.  The pairing of the music with the acting gives the greatest connection with the plot I’ve ever found.  Go ahead, girls, cry it out!

But if you need a good laugh, nothing is finer than a Buster Keaton flick.  One of the most underrated comedians of the silent era, Keaton was a genius at slapstick and telling a joke with his body.  You almost felt sorry for the poor guy, with the incessant “Awwww, I just sat in dog shit” facial expression he mastered. 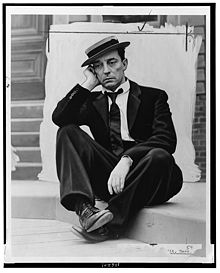 Charlie Chaplin must have had a better manager to have surpassed Buster Keaton in the minds of our generation as *the* comedian in the silent era.  Chaplin, as talented as he was, could not hold a candle to Keaton.

My personal favorite of his, “Sherlock, Jr.”, is brilliant comedy mixed with aesthetically groundbreaking cinematography. Keaton portrays a poor movie theater projectionist who has high hopes for winning the favor of a beautiful girl.  Keaton’s character is studying to be a detective, so he dreams (literally) about how to solve the mystery of a stolen pocket watch to win her heart, since he has no money with which to impress her. Unbeknownst to Keaton, he has been framed for the theft by some douchebag of a baller also trying to win the girl over.  Douchebag gets the girl temporarily with his flashy money, but Keaton’s character is more savvy with the street smarts.

The dream sequence is a masterful mesh of Keaton conforming real-time acting to the scenery around him on screen as it constantly changes – creating the illusion that he had joined the movie being played in the theater in which he is snoozing.  Keaton was so dedicated to his physical comedy that he severely fractured his neck in one scene while falling from a water tower (which became the cut used in the final version of the film).  He doesn’t miss a beat in continuing the scene.  As much as I know that fall was painful, it is still so damn funny I can’t help but laugh when I see it.  Keaton gave his all in a comedic performance, and his acting makes most modern-day comedians seem like amateurs.

Be it comedy or drama, silent films have what modern films don’t – simplicity in design, but superiority in output. I will forever be grateful to Dr. Kremling for introducing me to film as an art form, and I hope this will inspire at least one person to embrace a dying art…so perhaps it won’t die after all.

136 thoughts on “The Hidden Art of Silent Films”